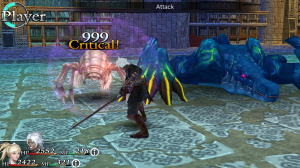 Mobile gaming on phones (and similar devices) is a field that is still trying to gain legitimacy. Though there are many puzzle games and many games which are nothing more than glorified time sinks, some people are trying to bring more substantive gaming experiences to phones. Chaos Rings (Android, iOS) is one of Square-Enix’s forays into this space.

At its core, Chaos Rings is a Japanese-style RPG. It uses a turn-based battle system and random encounters–features common for over a decade. The main unique feature of its battle system is its idea of “pair/solo” actions. When you spend a turn doing solo actions, the system plays identically to most other JRPGs. When you chose to do a pair action, though, both of your characters perform the same action–even if that action isn’t usually available to both characters. For instance both characters could use a multi-attack power that is usually only available to 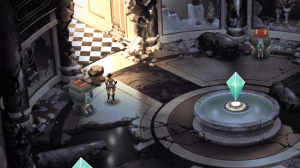 one of the characters. The downside to using pair attacks is that, when pair, the two characters also take damage together and are both hit by attacks that are normally single target.

The real judge of a JRPG’s system, though, is less about what it does and more about the amount of grinding necessary to play the game. It is a greatly unfortunate thing that Japanese-style RPGs far too often substitute grinding for gameplay. While there 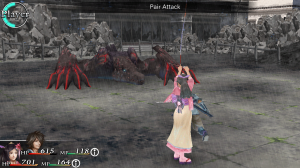 are cases where grinding is necessary, these cases do seem to be mercifully few and well separated in time. In fact, I believe there were only two bosses in the first scenario that I played that required any grinding at all, and, aside from the super-secret optional boss, there were no other bosses that required grinding in any of the other scenarios. 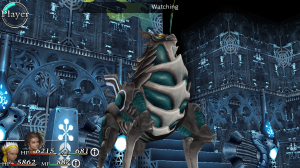 Of course, the scenarios are what really makes the game. The general premise of each of the scenarios is the same–a group of four couples has been pulled into the Ark Arena tournament. The winning couple will gain eternal life and eternal youth. The losing couples will find only death. What changes in each of the game’s four scenarios is two-fold. First, and most obviously, the characters that you control change. The same four couples are always involved, but the pair the player controls slides about. Second, and more important, the details of plots in the scenarios 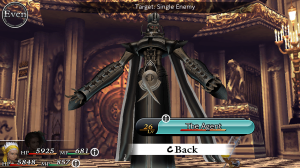 While the games areas, monsters, and other assets are mostly unchanged, these changes in the plot slowly unravel the mysteries surrounding the Ark Arena. In fact, the game doesn’t really begin to take shape until you’ve cleared at least one of the scenarios and have a good understanding of the motivations of the Arena’s masters. And that is where the game really begins to shine. Piecing together the motivations, back stories, and tragedies of the characters across the various scenarios makes completing

later scenarios more rewarding in some ways than completing the first scenario. As you become more familiar with the characters, there becomes a real desire to see each of their stories to the close.

Chaos Rings is by no means the best game nor the best RPG or even the best JRPG that I’ve ever played. It is, however, one of the best games I’ve yet played on my telephone and perhaps one sign that not every mobile game will be a micro-payment infested grindfest. And for that, it is certainly a game worth playing. 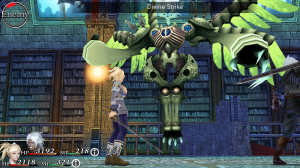