The Borderlands series has always built itself on two principles. First: high-speed frenetic combat. Second: clever, if somewhat lowbrow, humor. While the Pre-Sequel manages to continue the tradition of the first, the latter falls short this time around. 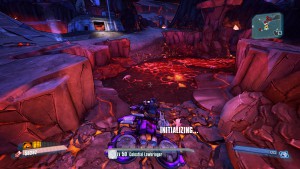 Don’t mind me, just flying over some moon lava.

In Borderlands: The Pre-Sequel, we’re following the story of Handsome Jack’s rise to power. For those not paying attention, Handsome Jack was the villain in Borderlands 2 who called you up and mocked you or talked about his diamond horse that he named after you (“Butt Stallion”). In fact, I would wager that Handsome Jack’s mocking in Borderlands 2 was the source of much of the game’s humor. He is certainly far more memorable than any other character in the game (with the possible exception of Tiny Tina). It would seem, in that case, that building another game around Jack would be a no-brainer. The trick, of course, is that he was killed off at the end of Borderlands 2. Thus, we must go back in time if we want to see more of him. 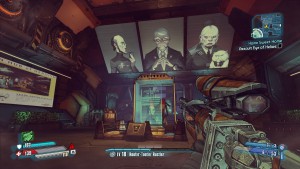 Unfortunately, this doesn’t work out very well in practice. Rather than letting Jack channel his inner comedic sociopath, we instead are forced to learn how Jack evolved from a relatively heroic man (at least by vault hunter standards) who was just trying to save the moon into villain we see in BL2. In order to do this, the writers gave the main plot arc a much more serious tone. The gameplay and the sidesquests, however, were left with the same aim toward humor which gives the whole thing a feeling of constant mood whiplash. The game as a whole thus suffers greatly. 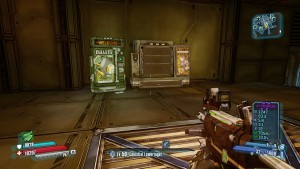 The Most Important Gameplay Addition — The Grinder

Interestingly, I think the gameplay itself has been somewhat improved over the previous iterations. Specifically, the addition of the grinder–an object which can convert three items that you don’t want into a new random item–may be the greatest improvement. All too often during Borderlands 2, I felt as though I was searching for weapons without finding what I needed. Worse, it seemed like every rare item drop I found didn’t suit my playstyle. The grinder addresses both of these issues by giving a useful way to “re-roll” the random drops. Even better, you can use the grinders to upgrade items by spending moonstones (the Eridium replacement) which makes finding orange drops (the rarest available) much less of a chore.

spike at the beginning of True Vault Hunter Mode. TVHM is the “hard mode” of the Borderlands games and in Borderlands 2, the sudden increase in difficulty when I started it caused me to stop playing much sooner than I probably otherwise would have. The Pre-Sequel, despite being a worse game, was able to keep me engaged into a second playthrough because that difficulty spike was smoothed out. (Of course, it also let me get back to a golden chest more quickly so that I could spam golden keys until I got a usable weapon, but I would also consider that an improvement).

Ultimately, I think the plot problems with The Pre-Sequel outweigh the niceties that have shown up on the gameplay side. I bought this game expecting laughs and found far too few.